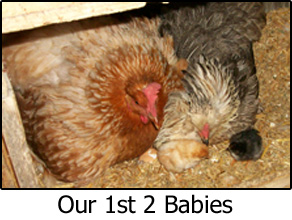 We are not strangers to raising our own chickens for meat. Both my husband Joe and I have helped our parents butcher chickens and Joe's parents had chickens for laying eggs on the farm for many years. However we had no experience actually hatching our own eggs. Our families always bought 100 - 150 two-day old chicks and raised them from that point. We had a few things to learn!

A few years back, Joe's brother bought eggs, incubated, hatched, and raised them. A few of those chickens ended up on our farm. So for the last couple years we had 2 or 3 laying hens and 2 roosters. Several weeks ago we had an over abundance of eggs in the refrigerator so Joe decided to stop collecting eggs and let nature take its course. What the heck – let's see if we get babies. If not, it's only a few eggs lost.

We had 2 hens but only one was laying at the time. The gray hen laid greenish/white eggs and the red hen laid brown eggs. Considering all the eggs being laid were brown, it was plain to see only one hen was producing eggs.

When the eggs are left in the nest and the mama hen begins to sit to hatch them, she will stop producing eggs. Of course she will lay however many eggs she has already produced in her body. If the egg has been fertilized by a rooster and the egg is kept warm, the chick will (hopefully) grow and hatch. Incubation time is approximately 21 days.

Our big white rooster named Big Bird or Whitey (I call him worse names when he attacks me but that's a story for another day) and the 2 hens, Red & Gray (not very original names but it's the best I can do) used to wander around our yard, pecking and scratching at anything and everything. They liked my garden a little too much earlier this year so I had to chase them out of there a few times. They liked to eat off the beet tops and dig holes in the dirt. But it was very fun to look up from my desk at any given moment to see them walking around aimlessly. I often think a cat's life would be the absolute greatest, but after watching the chickens wandering around our yard, I have decided a chicken's life would be pretty darn good too.

For nearly 6 weeks now I have missed my chickens wandering around the yard because Red had to sit on her eggs to keep them warm. You'd think Gray and Big Bird would have been wandering around but no, Gray decided she was mama too. Both hens sitting on the eggs seemed a little strange but having never done this before, we didn't think much of it. As for Big Bird, he would go outside but never far from the barn and his girls.

I should also mention our former milkhouse is now the chicken coup. What used to house our milk tank and milkers now houses chickens. Because it's made of concrete blocks it stays cooler in summer and warmer in winter so it's a perfect home for a few birds. We open the door in the morning so the chickens come and go as they wish all day but are safe from any wild animals at night.

And yes, we do have cats on the farm so when we first got the chickens I thought we'd never be able to let them loose to wander where they wish. I thought surely the cats would attack. However I quickly learned there was nothing to worry about as the cats are afraid of the chickens!